This Berlin based trio with Olaf Rupp on guitar, Matthias Müller on trombone and drummer Rudi Fischerlehner has developed a very individual and complex musical landscape which is influenced by the sound ideas and the extended playing techniques of each of the three musicians. Slight reminiscences of Electronic Music, Rock or Free Improv traditions might come up, just to be woven and reinterpreted into a complex and hypnotic sound that can be strange and attractive both at the same time.
The trio’s debut cd, „Tingtingk“, has been released on Gligg-Records in 2011. The second cd, „Tam“, has been released in 2013 on Not Applicable Records.

For Central European ears, the titles of their pieces consist of strange sounding words like bikbus or tingtingk. Olaf Rupp explains they come from Pidgin English from Papua New Guinea. Bikbus, for instance, means big jungle – literally „big bush“. „The idea came to us because when I was mixing Tingtingk I kept seeing the image of a dense jungle“, the guitarist goes on to explain. Drummer Rudi Fischerlehner adds: „We found the titles for our new CD on a wooden floor in Prague. The words PRE, PEI, SIN, and TAM were printed on the floor; they also exist in Pidgin English and happen to have nice meanings.“ The way they find titles for their numbers seems to be just as associative and unplanned as the way they make music. They create spaces between the sounds, in the combination of hearing and being heard, acting and reacting. „You can hear what’s coming from the individual musicians, what patterns are being created,“ says Rudi Fischerlehner. „Someone might add a counterpoint, pick up a theme, or join in, and of course as a band you develop a sense for collective sounds and dynamic tension.“ And in fact the trio’s music sounds like something in the process of creation, something organic, jungle-like, something that grows according to an inner logic. You won’t find any heady considerations about what will happen next. This is because, as the drummer puts it, „It’s not really a question of deciding what comes next, but more like a development. A color becomes predominant and then suddenly everything spills into a new direction, or a sequence abruptly ends and suddenly something new is there. I can’t say for sure whether it’s purely intuition, coincidence, group dynamics, fleeting quantum events, or all of the above.“ 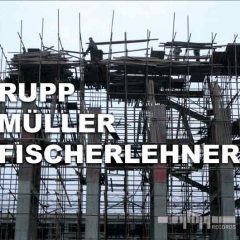 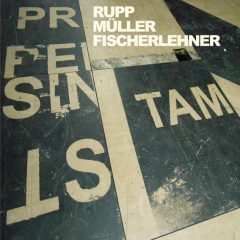 Olaf Rupp started at the age of twelve as an autodidact to play what might be called today Improvised Music. His way of holding the guitar in an upright position is inspired by Chinese pipa players. He refined some playing techniques like rasgueados, arpeggios and tremolos in such a way that they can be used for overtone and cluster effects to create new, „virtual“ sounds. He sometimes describes his music as „analog granular synthesis“ or „sonic pointillism“ because the intrinsic colour of every note or a group or notes is more important than the melodic or harmonic burden we may or may not put on them. He played among others with Lol Coxhill, Michael Wertmller, John Zorn, Joe Williamson, Paul Lovens, Butch Morris und Tony Buck. Five solo albums on FMP, GROB and GLIGG.
www.audiosemantics.de

Matthias Müller was born 1971 in Lower Saxony and began to play trombone in the local trombone choir. After spending ten years in the Ruhr Valley to finish his studies and do his first steps in Improvised Music, he moved to Berlin in 2004. Since then he played with numerous internationally recognized improvisers such as Frank Gratkowski, Johannes Bauer, Tobias Delius, Matthias Schubert, Peter Evans, Rudi Mahall, Burkhard Beins, Michael Vorfeld and many more. He also for many years was part of the German-French Jazz ensemble under the direction of Albert Mangelsdorff. In 2004 his CD „Bhavan“ was produced by Chicago based musician and journalist John Corbett. Today his main groups are the duo „SUPERIMPOSE“ with percussionist Christian Marien and the trio „THE ASTRONOMICAL UNIT“ with Marien and bass player Clayton Thomas. In addition to Improvised Music he is also working in the field of contemporary music, dance and theatre. He has been touring in Africa, Asia, North- and South America and many European Countries.

Rudi Fischerlehner plays the drums in numerous different projects from Jazz to Postrock, Improvised Music and experimental music. He also composes and produces music for other bands, film, video and performances. He was born in 1977 in upper Austria and since his childhood he plays the drums – preferably on weddings and funerals. As a teenager he was member of a rock band in Linz and also performed in selforganized concerts with Jazz and Improvised Music. For a certain time he was studying classical percussion at the Konservatorium Linz. After he finished school he moved to Vienna, where he was member of the Indie-Rock bands BLENDWERK and ROH. After he spent some time in New York and travelled to Africa and Sichuan he then stranded in Berlin and plays – besides RUPP/MLLER/FISCHERLEHNER – in bands like BLISK, PINX and Fiium Shaarrk.
www.rudifischerlehner.net